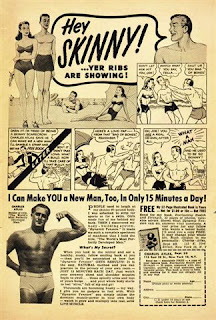 It was an embarrassing and humiliating event, but one that would radically change my life forever.
I was sitting with a group of jocks that had won letters in their individual sports. I was one of two who that lettered as a 10th grader. As I looked around the room, I was the skinniest kid in the group. My ribs were showing, they called me toothpick, the 97 pound weakling, a bag of bones. I wasn’t focused on the fact that I was receiving an award for being a golf star. Rather, I was sitting with my arms folded in front of me hoping that no one would notice how damn skinny I was!
The picture at the top right of the blog gives some indication as to my skinniness!
Right then and there I decided that I wanted to trade my frail body in for muscles. My goal was to transform my body to the point where no one would recognize me at the next class reunion.
Graduating from High school, I tipped the scales at 123# at 5 feet 11 inches. My arms measured 10 1/4 inches and was told by the “experts” that because of my small bones I would never have bigger than a 14″ arm. I refused to believe them and went to work. I joined a gym and began a serious regime of weight training. Some days I drank 6 quarts of milk. See next post.
← After!
Respect! →