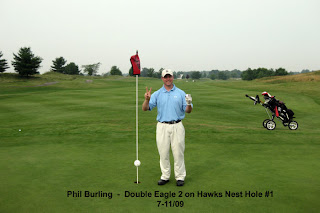 How many double eagles (albatrosses for those outside the U.S) have you seen with your very own eyes? Chances are none. Vegas odds makers put the chance, of the average golfer scoring a double eagle, at around 6 million to one. That’s 6,000,000 to just ONE.

In the afternoon of April 7, 1935, the Squire, Gene Sarazen, accompanied by his Caddie, “Stovepipe,” came to the par-5, 485 yard, 15th tee at Augusta National Golf Club. He was trailing Craig Wood by 3 strokes. Wood was finished with his final round and was waiting in the clubhouse with a score of 282. Gene’s drive, off the tee, went 250 yards and found the fairway. He had 235 yards to go to the pin on the green. There is a pond that separates the fairway from the green that crosses directly in front making a “run up” to the pin impossible. After talking with “Stovepipe” Gene selected his 4-wood for the extra loft it delivers for his second drive from the fairway. He swung the 4-wood and stuck a low line drive that delivered a shot that peaked 30 yards in the air. It was long enough to carry the pond guarding the green, bounced once and rolled to the cup . . . gently hit the pin and fell in. Gene Sarazen had scored a “double eagle” duce, three under par, to tie Craig Wood who waited in the Clubhouse. “The shot heard around the world.” The first double eagle recorded during tournament play. Approximately 20 people witnessed the feat. One of them was Augusta Nationals founder, Bobby Jones.

Tiger Woods and Phil Mickelson have yet to make a double eagle since joining the tour. Phil Burling of Aurora, Ohio has done what these “two hackers” haven’t been able to accomplish. &&&, dear reader, he has cut over a dozen strokes off his game in the meantime. In his own words, here is his story.

Dear Jim: Two years ago I purchased your DVDs and have been following your advice ever since. I have seen a great improvement in my game. I was averaging in the low to mid 90s, now I average in the low 80s. Hopefully, I will be shooting in the 70s soon; I have been so close numerous times! In addition, I used to average 200 yards off the tee, now I am averaging around 260 yards. You are right the golf swing is simple and you don’t need to be thinking about 100 things during the swing.

I will never forget yesterday (July 11, 2009). My regular league was playing Hawks Nest (Ohio State’s ATI course in Creston, OH). The first hole is a 474 yard par 5 and I hit a 270 yard drive followed by a 200 yard 3 hybrid into the cup for a double eagle. Obviously, I was ecstatic! And it was the first double eagle that my playing partners have witnessed. They were just as ecstatic as I was. We didn’t get to finish the round because of a thunderstorm, but it could have been my first round breaking 80. I don’t think I would have ever accomplished such a feat without your DVDs.

This is from Dave Diehl, one of my playing partners that day: We were playing in a threesome: Phil Burling, Gerry Flinn and myself, Dave Diehl. The first hole was a par five, I believe 470 yards +. Gerry and I hit our normal drives and Phil bombed his drive 70 yards + past us. I dubbed my second shot and hit my third about 50 yards from the green. Phil’s drive put him about 200 or so yards from the green so he waited for the green to clear before hitting his second shot. I was riding in a cart so I drove half way to the green to watch his approach. His second shot was a slow steady riser and when it hit ground, it rolled, rolled, and rolled – directly towards the green. There is a small mound in front of this green so as the ball rolled on I could not tell where it had stopped. Excited, I drove my cart towards the green and still saw no ball. Close to the green I jumped out and ran towards the green looking both short and long of the pin for the ball – still no luck. Upon reaching the green, I went directly to the hole and of surprise and amazement, I saw a ball in the hole. I looked back to Phil and Gerry who were still over 100 yards from the green and pointed three times down to the hole. They were elated as so was I. Gerry captured this moment with a picture of Phil showing two fingers with his captured hole in the background. This is the first time I have ever seen a double eagle for real after playing golf for over 40 years. Again Phil, great shot – great golf hole !!

Hole in Ones are a dime a dozen. Double Eagles are a rare bird that you may never see. Way to go Phil Burling! May we all be so fortunate.