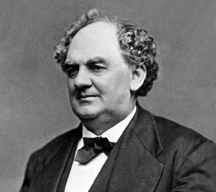 P.T. Barnum, (July 5, 1810-April 7, 1891) was an American showman remembered for hoaxes and for founding the circus that became the Ringling Bros. and Barnum & Bailey Circus.
Barnum started as a store-keeper, and he learned haggling, striking a bargain, and using deception to make a sale.
He began as a showman with his purchase and exhibition of a blind and almost completely paralyzed slave woman, Joice Heth, claimed by Barnum to have been the nurse of George Washington, and to be over 160. Barnum followed that with the exhibition of Charles Stratton, the dwarf “General Tom Thumb” (“the Smallest Person that ever Walked Alone”) who was then four years of age but passed off as 11. With heavy coaching and natural talent, the boy was taught to imitate people from Hercules to Napoleon. By five, he was drinking wine and by seven smoking cigars for the public’s amusement.
An instance of his enterprise was the engagement of Jenny Lind “the “Swedish Nightingale” to sing in America at $1,000 a night for 150 nights, all expenses paid by the entrepreneur in advance – an unprecedented offer. “Jenny Lind mania” was sweeping Europe and she was a favorite of Queen Victoria. She was unpretentious, shy, and devout, and possessed a crystal-clear soprano voice projected with a wistful quality which audiences found touching.
Late in 1860, the Siamese Twins, Chang and Eng, came out of retirement (they needed more money to send their numerous children to college). The Twins had had a touring career on their own and went to live on a North Carolina plantation with their families and slaves, under the name of “Bunker.” They appeared at Barnum’s Museum for six weeks.
Also in 1860, Barnum introduced the “man-monkey” William Henry Johnson, a microcephalic black dwarf who spoke a mysterious language created by Barnum.
Barnum was a cleaver con-artist deluxe who made several fortunes fooling people, but he was at least entertaining. The phrase “A Sucker born every minute,” would today read, “A Sucker born every second.”
Barnum’s hoaxes could be a fitting inspiration for today’s golf instructors. Any similarities between P.T. Barnum and today’s golf instruction super powers is purely intentional.
Historical documentation from Wikipedia, the free encyclopedia
Jim McLellan,
Today’s Anti-Pro_Maverick

← Are We There Yet?
Become A Super Putter →