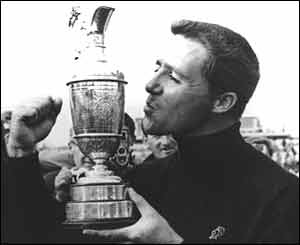 So, Gary Player, with over one hundred sixty-six wins, including 9 majors and 3 Masters, gives Trevor Immelman advice on what to do to win the Masters.
Why then are there thousands and thousands of golf instructors who say Gary’s advice isn’t important? Either they are ignorant or they don’t fully understand how deadly important it really is.
They are NOT teaching THE most important part of the golf swing! Without IT the golfer can do EVERYTHING right, except this ONE THING, and have disastrous results.
In good conscience . . . how in the world can a golf instructor say IT is NOT important, take their students money, watch them get worse, & laugh all the way to the bank? They can get away with it because the student will NOT stand up to his instructor and tell him, that quite frankly, they are not getting any better! The number one most important factor in the golf swing is what all consistently great golfers, good golfers, and mighty fine golfers do. Why won’t they teach it? Duh, maybe they don’t know how to teach?
And what it the most important thing they should be teaching their students? It’s what Gary told Trevor to do to win the Masters….& it worked didn’t it?
“KEEP YOUR HEAD STILL!”
Jim McLellan/The Maverick