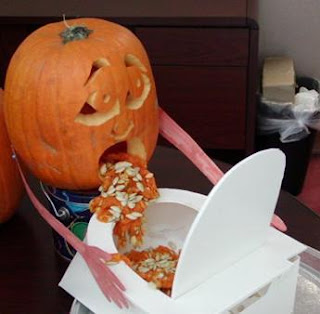 The Puke Factor is a term coined by The Anti-Pro. The PF signifies a point at which a person finally gets so disgusted with themselves that they throw-up, up chuck, heave, hurl, toss their cookies, get sick.
The PF is a line in the sand, a place in time and space, an event that alerts us that enough is enough.
You can’t get your car into the garage because of all the junk . . . you decide to spend the weekend cleaning it out. You can’t find your favorite tie in your closet, for all of the clothes you haven’t worn since WW ll, so you buy one of those closet organizers and go to work. You are in the shower and you look down and can’t see your Tallywacker, because your gut is so huge, so you start exercising and cut out the chip & dip, banana cream pie, death by chocolate-4 layer cakes, and other Tallywacker Hiders. Whoa, another phrase coined by the AP, The Tallywacker Hider (four syllables followed by two, nice melodic ring don’t ya think?) & although sickening, not as bad as the Puke Factor. All of the above reached their PPF . . . Personal Puke Factor, and finally did something about it.
How about the United States of American for which it stands? Stands for WHAT? The USA is 9.5 Trillion dollars in DEBT__ yet we keep throwing money at every country in the world with their hand out.
Need some help with a Trillion. A Trillion seconds ago was, get ready for this, over 36,000 YEARS ago. That, boys and girls was 34,000 YEARS B-4 Jesus was making furniture in Nazareth. Trillion = 1,000,000,000,000. The country has not existed for a trillion seconds. Western civilization has not been around a trillion seconds. One trillion seconds ago – 31,688 years – Neanderthals stalked the plains of Europe. & that’s only 1 measly Trillion. Multiply that by 9.5 for YOUR NATIONAL DEBT. Show me the money. Time to Puke!
Millions of Americans haul their butts out of bed every morning and go to work to support someone on Welfare with ten kids from 10 different Daddies so she can wake up at noon in time to watch her ‘soaps’. And our wonderful Candidates running for the most powerful position in this country and, in the world, couldn’t run a lemonade stand. And the citizens of Iraq were starving to death as they watched Saddam and his boys build their 19th Palace as an edifice to themselves. Where is the Puke Factor in all of this?
When does the Puke Factor kick in with your Golf Game? You read golf tips, take lessons, go to golf schools, watch golf on TV and play AT it. Your Lazy Boy recliner gets more time with you reading about golf than you play golf. You have a law suit pending from a home owner off the 3rd fairway, thanks to your slice that smashed their picture window and killed the family pet. Your swing looks like you’re killing snakes. You have over 3 sets of clubs at the bottom of the lake on 18. Your score cards in the triple digits. Ladies from the Westhaven Rest Home out drive you. You shanked a 9 iron and “put the eye out” of one of your playing partners. Last Saturday you spent the afternoon in the sand trap on the 14th. Time after time year after year you’re pathetic but do nothing about IT. You haven’t reached your Puke Factor. MOST golfers NEVER do!

90% of Golfers NEVER break 90! They haven’t reached their Puke Factor or just don’t care. A mere 10% of golfers can break 90? Isn’t that enough to gag a maggot? This game is NOT that difficult. The swing only takes two seconds. Too fast to think. The ball sits there until you hit it, unlike tennis or football or basketball where the ball’s flies all over the joint. If you can break 90 or 80 or shoot par, good for you. You’re a rare breed. I’ll bet you’ll agree with me that golf is not that difficult, won’t you. You will also agree that most golf instruction will make you worse won’t you? If you can’t break 90, get real mad, go throw up somewhere, and do something about it. Golf’s a heck of a lot more fun on the under side of 90.

← Become A Super Putter
You, The Movie Star →

6 Responses to The Puke factor